News on the Tsar's Rehabilitation

Moscow, April 7, Interfax - The House of Romanov stated that the Russian Investigative Committee (SKR) has refused to provide a copy of the ruling closing the criminal case over the execution of Emperor Nicholas II and his family.

"The Investigative Committee explained its decision by the fact that Grand Duchess Maria Vladimirovna is neither a party in the criminal proceedings, nor a person whose interests would be affected by such procedural decision, so a copy of the ruling cannot be issued under the Russian criminal procedural laws," Lukyanov said.

"Grand Duchess Maria Vladimirovna believes that this decision is illegal and baseless. It will be duly appealed at a court," the House of Romanov lawyer said.

In February, the head of the House of Romanov filed a written request with the SKR and the Prosecutor General's Office, asking to provide her with a copy of a January 14, 2011 ruling to close the criminal inquiry into the royal family execution.

In July 1991, the remains of nine people were found in a mass grave discovered on the Staraya Koptyakovskaya Road near Yekaterinburg. They are believed to be those of the royal family members: Nicholas II, his 46-year-old wife Alexandra Feodorovna, their daughters - 22-year-old Olga, 21-year-old Tatyana and 17-year-old Anastasia, as well as people from their entourage: 53-year-old Yevgeny Botkin, 40-year-old Anna Demidova, 62-year-old Aloisy Trupp and 48-year-old Ivan Kharitonov.

On July 29, 2007, the remains of two more persons were found during an archeological dig 70 kilometers south of the first mass grave. Numerous tests suggest that these are the remains of Tsarevich Alexey and his sister Maria.

The House of Romanov stated earlier that it was too soon to put a full stop in the case over the Nicholas II murder. In particular, there are still questions about the authenticity of the royal remains.

Meanwhile, the SKR said in a statement issued in January that the remains found near Yekaterinburg were those of the royal family and the people close to them, who were executed by Bolsheviks. 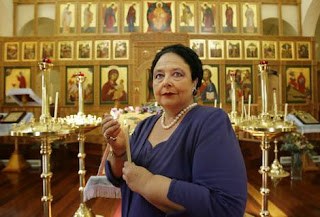 Grand Duchess Maria of Russia
http://www.interfax-religion.com/?act=news&div=8347
Posted by Unknown at 9:33 AM