The third surprise is that he celebrates St Patrick's Day.

But perhaps none of this should be surprising because Albert II of Monaco had an American parent, as well as a royal one, and that US parent prized her Irish identity. She was, of course, the Hollywood star Grace Kelly, and among the lessons she taught the son she called Albie was to prize his Irish roots.

Never underestimate the influence of an Irish mammy. Or an Irish-American one, come to that.

It's hardly a coincidence that Albert should make a state visit to us now, on the 50th anniversary of Grace's triumphant first homecoming -- a trip on which Albert came too, as a three-year-old boy. And it's rather charming that, on his arrival today, he brings with him the woman who is stepping into his mother's shoes: his fiancée Charlene Wittstock.

But back to St Patrick's Day in Monaco. No doubt Grace grew up marking the occasion in Philadelphia, where her father made his fortune in construction (how Irish is that?), and carried the tradition with her after marrying Rainier in 1956.

The first time I encountered Prince Albert he was wearing a tie decorated with shamrocks, and drinking Irish whiskey from a Waterford tumbler. It was St Patrick's Day 2009, and he turned up at a party in the Princess Grace Irish Library, where I was writer-in-residence.

Informally, with just one aide, he strolled downhill from his clifftop palace overlooking the Mediterranean, along picturesque narrow streets, before climbing the steps to the library. 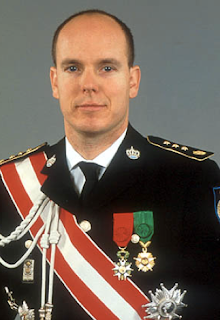 http://www.independent.ie/opinion/columnists/martina-devlin/martina-devlin-its-little-surprise-prince-albert-exudes-such-grace-2608317.html
Posted by Unknown at 9:37 PM