The Prince of Wales Aston Martin

In the most informal part of the royal wedding celebrations, Prince William and Kate Middleton waved from the convertible while an RAF rescue helicopter flew overhead.
They emerged from the palace gates at about 3.35pm in a dark blue Aston Martin DB6 MkII belonging to the Prince of Wales.

The car, which runs on bioethanol fuel distilled from surplus British wine, was festooned with red, white and blue streamers tied to the bonnet, rosettes on the windscreen and an “L” learner plate on the front.

Trailing from the back were heart-shaped balloons and others bearing the initials “W” for William and “C” for Catherine, while a yellow rear number plate had been added that read: “JU5T WED”.

Prince Harry, the best man, and other friends and family had decorated the car, which had been a 21st birthday present from the Queen to the princes’ father, in the traditional style for newly-weds. 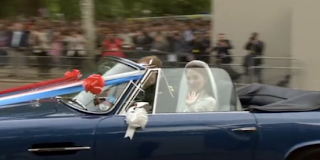 http://www.telegraph.co.uk/news/uknews/royal-wedding/8483980/Prince-William-and-Kate-Middleton-drive-out-of-Buckingham-Palace-in-Prince-Charless-Aston-Martin.html
Posted by Unknown at 11:26 AM