Birthday Celebrations in the UK!

The sovereign's birthday coincided with Maundy Thursday, the day marking Jesus' Last Supper, when the queen traditionally gives special coins to as many men and as many women as the years of her life.

So this year 85 men and 85 women received two coin purses during the ceremony at Westminster Abbey.

The red one contained a 5 pound ($8) coin commemorating the 90th birthday of her husband Prince Philip and a 50 pence coin marking the 2012 London Olympic Games. The white one held specially minted Maundy Money of one, two three and four pence pieces, adding up to a total of 85 pence 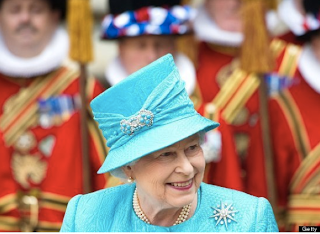