31st March 2011
The Prince of Wales and The Duchess of Cornwall received a warm and relaxed welcome from The King and Queen of Spain today.

Their Royal Highnesses were greeted at the Spanish Monarch's home in the mountains above Madrid before a private lunch on the second day of their official visit.

The two families are old friends and share a common ancestor in Queen Victoria – The Prince of Asturias is Her Majesty The Queen's cousin.

The Prince and The Duchess’s visit to Spain is part of a 10-day tour promoting UK trade and sustainable living.

Earlier in the day, Her Royal Highness and The Princess of Asturias visited a training centre for guide dogs for the blind.

The Duchess, who owns two Jack Russells called Rosie and Tosca, appeared delighted at the visit where she was asked to name a two-month-old flat-coated retriever - choosing Columbus after the explorer who discovered the Americas for Spain.

The Duchess and The Princess also met Babu, a black Labrador which has recently completed its guide dog training, and saw a display of the dogs' skills.

At the conclusion of the visit, each was presented with a small model guide dog.

There was also a special treat for The Prince of Wales when he was given the Golden Key of Madrid at the city's regional assembly.
Her Majesty The Queen was presented with a Key of the City during a State Visit in 1988.

During a speech, The Prince praised the work of Spanish companies on sustainable development.

"I want to applaud their efforts to recognise that climate change is a clear and present danger and to waste no time in doing all they can to adapt their practices and business models to tackle it," he said.

"I am afraid we have no choice but to work together to build low-carbon economic growth if we are to bequeath a planet capable of sustaining human life for our children and grandchildren."

Earlier in the day, The Prince also discussed climate change with the Spanish Prime
Minister, Jose Luis Rodrigo Zapatero, at his Moncloa Palace office and residence, as well as touring Respol technology centre, an oil company that is undertaking work in bioenergy.

Her Royal Highness is Patron of the organisation, which is launching a project in Barcelona to support UK residents living in Spain. 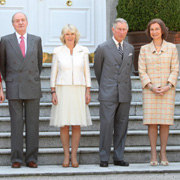