The cover photograph of the Russian and Romanian royal families in 1914 says it all.  An era is ending. Within four years half of the people in this picture will be dead. Others will see their relatives forced into exile as the First World War ends. Yet the families continued to gather at christenings, weddings and funerals. The differences in these royal alliances now become apparent, as the royals gradually begin marrying outside of accepted circles.

The format is the same as the previous volume. A large picture of a royal gathering, followed by a discussion of the individuals pictured, with smaller photographs of the people concerned. Every royal family in Europe is featured somewhere in this book, from that last meeting between the Romanovs and the Romanians in 1914 to the wedding of Princess Irene of Greece and the Duke of Spoleto in 1939. This a work you can dip into time and time again, and there are some real gems. In 1916 the Dowager Duchess of Saxe-Coburg & Gotha (the former Grand Duchess Maria Alexandrovna of Russia) sits on a bench in Zurich with her Spanish grandsons.  They are the children of her daughter Beatrice (Baby Bee) and the Infante Alfonso of Spain. Little has been published in English about Baby Bee’s life, but you can read about it here.

The Luxembourg royal family gathered in 1919 for the wedding of Grand Duchess Charlotte and Prince Felix of Bourbon-Parma.  They are well-known, but in 1931 the Luxembourgs assembled again for the 70th birthday of Charlotte’s mother Grand Duchess Maria Anna, who sits proudly surrounded by her grandchildren from the royal houses of Luxembourg, Bavaria, Saxony, and Thurn und Taxis. Their parents’ lives are outlined here and we are promised more about the children in volume III.

Then there is one of the most unusual photographs, taken at the ordination of Prince George of Bavaria, eldest grandson of Emperor Franz Joseph. Many of the Bavarian royals pictured also attended George’s wedding to Archduchess Isabella of Austria nine years earlier. The marriage failed and in 1921 George became a priest – not something we read about every time we open a royal book.

Some of the most poignant images were taken at the funeral of Queen Astrid of Belgium, killed in a car accident in 1935. Particularly moving is the widowed King Leopold III, with his arm in a sling and a dressing on his face, as he follows his beloved wife’s coffin. Then there is Grand Duchess Eleonore of Hesse and by Rhine with her young grandson Alexander. They would be killed in the Hesse air crash in 1937 along with other members of their family. The funeral is featured in these pages.

The scope of research and the depth of subjects covered is simply amazing and the picture reproduction is excellent. The images come from the huge Eurohistory archive, which has been recently enhanced by the acquisition of the late William Mead Lalor’s archive. My favourite has to be the gorgeous photo of Princess Ileana of Romania with her dogs on page 108.

This marvellous book has something for everyone and whatever your particular interest you can’t fail to find something to excite you. Sadly though, as we view these images, we know that war will soon be coming again and that the fate of some of these people will be grim. But that is for Royal Gatherings, Volume III. 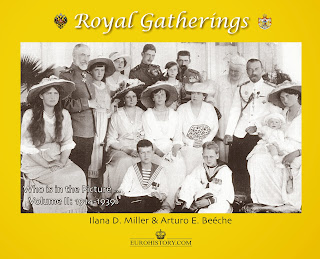