Increasing rumors that the once celebrated union between Prince Ernst August of Hannover and Princess Caroline of Monaco is at an end, Bunte Magazine (Germany) has published photos of the husband in the company of a strip model...lovely!

The UK's Daily Mail reports further: "The husband of Princess Caroline of Monaco has taken to travelling around with a former nightclub dancer from Romania who now models for brothels in Austria.

Prince Ernst August of Hanover - a cousin of Queen Elizabeth - has been photographed in some of Europe’s hotspots with the woman known only as Simona who comes from a slum apartment in a Romanian town.

But while speculation has been growing that Princess Caroline would split from him all year, Euro royal-watchers believe the couple have reached an 'accommodation' - in essence, a free pass for separate lives while still legally married." 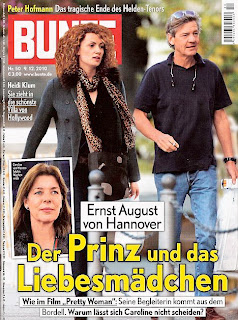 Read more: http://www.dailymail.co.uk/news/article-1342135/Princess-Carolines-husband-Prince-Ernst-steps-22-year-old-ex-dancer-models-brothels.html#ixzz19WDkD2IM
Posted by Unknown at 8:28 AM