By By Gordon Rayner, Chief Reporter – The Telegraph 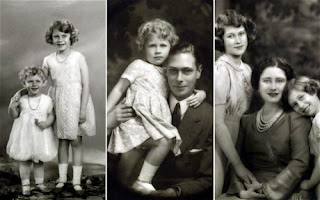 Among the photographs on exhibition are a three-year-old Princess Elizabeth cuddling her father (C); with her sister Margaret; and the two girls with their mother, Queen Elizabeth, in 1940  Photo: THE ROYAL COLLECTION

They include some of the most informal studio portraits ever taken of the princesses with their parents, which will be among more than 100 prints on display dating from 1926 to 1956.
One of the earliest photographs is of the three-year-old Princess Elizabeth cuddling her father, the then Duke of York, in 1929. Three years later, the future Queen posed with her younger sister shortly before Princess Margaret’s second birthday, and in 1940 the princesses, aged 14 and nine, were pictured with their mother, when Princess Elizabeth also posed in a kilt and tweed jacket.

Mr Adams, who died in 1959, set up a Children’s Studio in London in 1920 and quickly became one of the country’s most renowned photographers of children.

He filled his studio with toys and even disguised his camera as a toy cabinet to put his subjects at ease. His studio, which contained no visible cameras, lights or other equipment, was described by him as “a bright and very happy play room” and used a long cable to press the shutter so he did not have to disappear behind the camera.

http://www.telegraph.co.uk/news/newstopics/theroyalfamily/8208967/Unseen-childhood-portraits-of-the-Queen-and-Princess-Margaret-to-go-on-display.html
Posted by Unknown at 8:30 AM