The Queen and The Duke of Cambridge

The Daily Mail has gotten an extended insider scoop on the royals, thanks to Mail reporter Robert Hardman's research for his book "Our Queen."
While there will surely be many juicy anecdotes from the book, our favorite so far is a tidbit from Prince William talking candidly about his grandmother -- and her taste in clothes.
"I wanted to decide what to wear for the wedding," Prince William said in the excerpt. But the Queen would have none of it.

The "this" was the bright red military uniform. Writes Hardman, "Having just appointed Prince William to the position of Colonel of the Irish Guards, his most senior military appointment — and one of her Guards regiments to boot — the Queen was quite clear that her grandson should be getting married in his Irish Guards uniform."

Apparently the prince is an officer in all three Services of the British military as well as a Royal Air Force member -- we didn't realize there were so many uniform options!

What we did know, however, is that the Queen has plenty of opinions about such things. Although Kate picked out her own dress, Queen Elizabeth II was not a fan of the dress's exhibition at Buckingham Palace.

"Horrid, isn't it? Horrid and dreadful!" the Queen supposedly commented to her new granddaughter, who took in the Royal Wedding exhibit with the Queen in July. 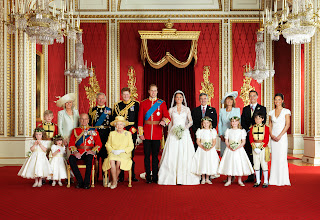