The Museum of Bavarian Kings opened in Schwangau on Friday. The new museum traces the history of the Wittelsbach dynasty, which ruled the southern German kingdom until 1918.

The museum is housed in the former Grand Hotel Alpenrose on the shores of the Alpsee, a lake made famous by its proximity to two castles: Hohenschwangau and Neuschwanstein, the white palace built by Ludwig II and popularized by Walt Disney’s iconic castle.

With 1,000 square metres of exhibition space the museum will explore the Wittelsbach family, who ruled from 1180 until the 1918 revolution in Bavaria.

Over a million tourists visit the fairy tale castle of Neuschwanstein every year, and the Wittelsbach Equalization Fund, which manages the property and possessions of the former ruling dynasty, hopes to attract around 200,000 of those visitors to the new museum.

“People are fascinated with Neuschwanstein, but they return from their visits with many unanswered questions,” said Elisabeth von Hagenow, the art historian who coordinated planning, construction and conception of the museum over the last three years.

The 800-year family history will be presented in the two-story space. An exhibition highlight includes the “walk in family tree,” which offers visitors an extensive orientation to the Wittelsbach dynasty. Porcelain, jewellery and portraits also illustrate the family’s influence.

One of the most valuable displays, according to Luitgard Löw, the new museum director is the 90-piece precious carved tableware set – a wedding gift from Ludwig I to his son and heir, Maximilian II. 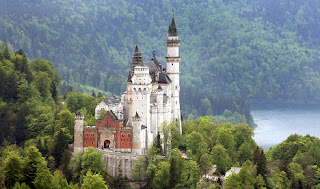