The magnificent former residence of Prince Roland Bonaparte (1858-1924), French erudite, herbologist, scientist and explorer, is soon to open as a luxury hotel. With magnificent views of the Eiffel Tower and located near the Trocadèro, the Shangri-La Hotel promises to become a favored destination who can afford the surely to be astronomical prices for a nightly rate.

Prince Roland was married to Marie-Félix Blanc, daughter of Louis Franc, the force behind the Casino de Montecarlo, as well as one of the richest heiress in the France of her time. Roland and Marie-Félix married in 1880. Two years later she gave birth to a daughter, Princess Marie, who was to be the couple's only child. Marie-Félix's happiness in motherhood was fleeting. Death took her barely two months after the birth of her daughter, an event from which she never recovered. 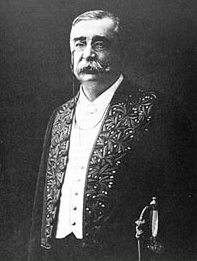 Princess Marie-Félix Bonaparte left behind an incalculable fortune, most of which was controlled by her husband Prince Roland. In 1907 their daughter married Prince George of Greece and Denmark, thus securing this intriguing son of a king, brother of a king, uncle to monarchs, nephew of empresses and queens, lover of an uncle, a life of immense pleasure and privilege. Prince George and Princess Marie were the parents of two children: Peter and Eugenie. Prince Peter (1908-1908) married morganatically, causing his stickler of a father a much unwanted disillusion. Princess Eugenie (1910-1989) married twice. Her first husband was Prince Dominic Radziwill (1911-1976), by whom she had two children: Tatiana and Jerzy. Eugenie's second husband was Prince Raymundo della Torre e Tasso, Duke of Castel Duino (1907-1986), by whom she had one son: Carlo Alessandro, current owner of Castle Duino, near Trieste.

http://www.shangri-la.com/en/property/paris/shangrila
Posted by Unknown at 9:03 AM