Some find him tough...I honestly find him endearing even though he called me "peculiar!"

Several years ago when I met the Duke of Edinburgh at a private event in Germany, he thought that a Costa Rican who wrote books about European royalty and was an expert on the Gotha, was "most peculiar!"

To that statement, I replied, "Indeed Sir..."

I know I'm peculiar...The Duke of Edinburgh was not telling me anything I did not know and in fact gave an anecdote I will forever share with my readers and friends!

I happen to be a big fan of Prince Philip's...

Anyone who at nearly ninety-years of age does as much as His Royal Highness deserves our admiration! 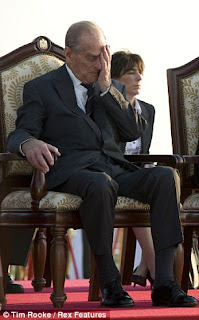 http://www.dailymail.co.uk/news/article-1333035/Ive-got-to-work-Another-classic-gaffe-Prince-Philip-refuses-shake-hands-royal-visit.html
Posted by Unknown at 7:40 PM