Henri of Luxembourg – Ten Years on the Grand Ducal Throne

A nice book was published in Luxembourg to commemorate the first decade of Grand Duke Henri's ascension to the Grand Ducal Throne.

As Hereditary Grand Duke of Luxembourg, Henri broke with tradition when choosing a commoner as his wife, Ms. María Teresa Mestre, whose family was exiled from Cuba since the Castroist revolution enshrined Communism on the largest island in the Caribbean. The couple remains devoted to one another and are the parents of five children, among them hereditary Grand Duke Guillaume, who remains unmarried.

Eurohistory.com will carry this new book, which promises to be very interesting! 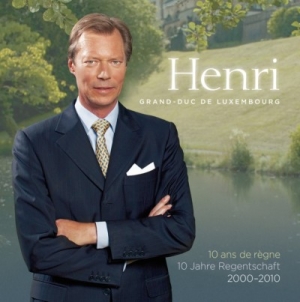