HRH Prince Charles-Philippe d’Orléans, Duke d’Anjou, has given his name and support to the association formed to lobby for the rebuilding of the Château de Saint Cloud.

The Château de Saint-Cloud was a royal residence in France, built on a magnificent site overlooking the River Seine at Saint-Cloud in Hauts-de-Seine about 10KM west of Paris. Today it is a large park on the outskirts of the capital and is owned by the state, but the area as a whole has had a large part to play in the history of the country. The castle's grounds are part of today's Parc de Saint-Cloud.
The château was built expanded in the XVII century by Prince Philipp of France, Duke d'Orléans, the infamous brother of King Louis XIV. He had purchased the land in 1658 and began building a magnificent pleasure palace on it. Philippe continued building until his death in 1701, at which time Saint-Cloud passed to his son, the future regent of France. It was finally enlarged by Queen Marie Antoinette in the 1780s. Saint-Cloud was popular with Emperors Napole I and Napoleon III, but it was destroyed during the Franco-Prussian War. The ruins were finally razed to the ground in 1891 and what remains today is a magnificent park overlooking Paris.
The gardens around the now-gone edifice were created by the eminent French park designer and architect André Le Nôtre, and although beautiful then, remain a magnificent legacy today.
As the German armies laid siege to Paris, the château was overtaken by the Prussians, who setup their general headquarters in it. The park and château enjoying a privileged view overlooking Paris, the Prussians also setup up heavy artillery which they proceeded to use when bombarding the French capital. In retaliation, the French set the sights of their cannon on the Prussians and returned fire. One of the shells landed on the château and set off a massive fire that consumed the beautiful structure. The date was October 13, 1870. Luckily, the furnishings were previously removed on order by Empress Eugenie, thus saving a considerable share of the national patrimony from the consuming and unforgiving fire. 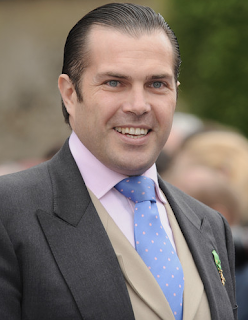 http://www.ducdanjou.com/actualites_prince-21.html
Posted by Unknown at 8:08 AM