Just a week ago HIRH Archduke Otto, the last Crown Prince of the Austro-Hungarian Empire, celebrated his 98th birthday.

It seems amazing that just eight years ago I was in Vienna attending the celebrations for Archduke Otto's 90th birthday. Back then I had the opportunity to sit with him and dialogue about his role in efforts to unify Europe, among many other topics.

Also while in Vienna I got to spend time with some other contemporaries of the Archduke, among them his brothers Carl Ludwig and Otto, as well as Fürstin Tatiana Metternich, all three now deceased, sadly.

Archduke Otto, eldest child of then Archduke Karl and his Bourbon-Parma wife, Zita, was born on 20 November 1912 at Villa Wartholtz in Reichenau. Seven other children eventually joined the imperial nursery: Adelheid, Robert, Felix, Carl Ludwig, Rudolf, Charlotte and Elisabeth. All, with the exception of Otto and Felix, have now joined their parents in eternal rest.

Archduke Otto was married to the former Princess Regina of Saxe-Meiningen in 1951. Their wedding took place in Nancy, France. The couple had seven children, all alive today. Archduchess Regina passed away earlier this year and was temporarily buried in Thüringen, pending transfer to a final resting place where she will lay next to her husband of nearly sixty years.

Since the passing of his wife, Archduke Otto, who is in frail health, has remained away from the public eye. He continues living in his family residence in Bavaria.

Had the empire survived the cataclysmic end of the Great War, Archduke Otto would most likely be in the 88th year of his reign, the longest ever headship of house in any European Monarchy.

He is nothing short of an amazing man...and I am truly honored to have been able to meet him on several opportunities and spend time discussing myriad topics. These meetings are memories I will treasure until the day destiny takes me from this world. 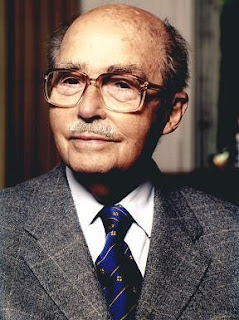