More than a third of Britain's land is still in the hands of a tiny group of aristocrats, according to the most extensive ownership survey in nearly 140 years.

In a shock to those who believed the landed gentry were a dying breed, blue-blooded owners still control vast swathes of the country within their inherited estates. 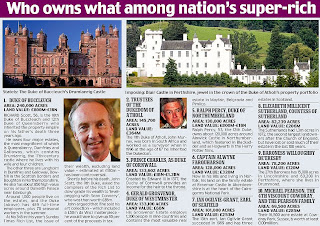 http://www.dailymail.co.uk/news/article-1328270/A-Britain-STILL-belongs-aristocracy.html
Posted by Unknown at 8:20 AM