On Sale at Eurohistory – DEAREST MISSY

The Letters of Marie Alexandrovna, Grand Duchess of Russia, Duchess of Edinburgh and her daughter, Princess Marie of Edinburgh, Crown Princess of Romania (1879-1900); hardback, 472 pp., 40 photos , RRB, October 2011.
Marie Alexandrovna’s life and character has been imprinted by her upbringing at the Russian imperial court, as the daughter of Tsar Alexander II, in a grandiose and yet level-headed milieu that in a great measure personified her father’s way of life and vision of the world. Her personality was thus a distinctive mix of dominant behaviour and imperial outlook, tempered by an astute, realistic perception of the world. 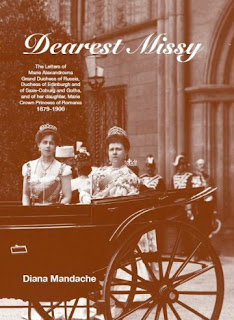