Spain: The King and the Crisis

MADRID — With Spain mired in an economic slump, many Spaniards are questioning their king, long revered for his role in bringing democracy to the nation but now being scrutinized for his deluxe lifestyle and opaque fortune.
An accident this spring, when the king broke his hip while elephant hunting in Botswana, exposed a rarefied world of business contacts and set off an unusual public outcry over why the Spanish monarch, Juan Carlos I, was off on a pricey African safari during a time of national hardship.
The episode led to an unusual royal apology, but the collateral damage has left the king, 74, recalibrating his monarchy. He has stepped up his public appearances, embracing his role as an international business booster and conciliator amid rising fury over government-imposed austerity measures intended to help shore up confidence in the country’s finances.
“The monarchy will continue as long as the people want a monarchy,” the king said on a swing through New York last week, part of a palace strategy to meet with top opinion makers to help promote confidence in Spain.
Europe’s economic crisis has politicians and struggling taxpayers from Belgium to England openly weighing the costs of subsidizing royals. Unlike other European monarchs, Juan Carlos came to the throne after the death of the dictator Gen. Francisco Franco in 1975 with virtually nothing, and has worked hard to generate his own fortune beyond the annual 8.3 million euro budget, or $10.7 million, bestowed on the palace by the Spanish government.
The king is widely valued in business circles for acting as a sometime deal maker and economic ambassador for his nation, but how he has amassed his substantial personal wealth remains secret. The Spanish royal family’s wealth has been estimated at up to $2.3 billion, a sum that supporters contend was inflated by the inclusion of government properties.
To promote Spain’s businesses and help repair his image, Juan Carlos took the controls this month of a cutting-edge NH90 helicopter during a visit to a Eurocopter manufacturing plant in Albacete. On Thursday, he inaugurated a new Barcelona container terminal.
It is all part of his campaign to advance “Brand Spain,” as the king put it in response to written questions, another palace step to demonstrate openness. His message for Spanish business, he added, is straightforward: “Export, export and export.”
Juan Carlos’s peripatetic role as a business diplomat and deal maker was brought into the limelight after the safari, which was subsidized and organized by Mohamed Eyad Kayali, a Syrian construction magnate.
The two longtime friends had worked together on a $9.9 billion bullet-train contract that the monarch helped broker last autumn for a Spanish consortium in Saudi Arabia. Leveraging his friendship with the Saudi king and other royals, Juan Carlos outmaneuvered a French bid.
Supporters and advisers to the palace insist the king does not receive commissions on the deals he mediates or promotes.
Continue reading... 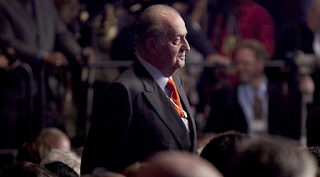