Berlusconi Smack in the Middle of it!

What I fin amazing is the utter level of hypocrisy...Silvio Berlusconi who claimed that photos of his private alcohol, drug and prostitute-filled parties were a violation of his privacy...now does not respect the privacy of others...what a stronzo!

ROME (AP) — An Italian gossip magazine owned by former Premier Silvio Berlusconi published a 26-page spread of topless photos of Prince William's wife Kate on Monday despite legal action inFrance against the French magazine that published them first.
Chi hit newsstands on Monday, featuring a montage of photos taken while the Duke and Duchess of Cambridge were on vacation at a relative's home in the south of France last month. They included the 14 pictures published by the popular French magazine Closer, which like Chi is owned by Berlusconi's Mondadori publishing house.
But the Chi spread ran the whole sequence of photos as the couple sunbathed on a terrace, including one shot of the princess putting sun cream on her backside that didn't appear in Closer.
The couple is hitting back hard against the publication of the images, which William's St. James's Palace called a "grotesque" invasion of their privacy. 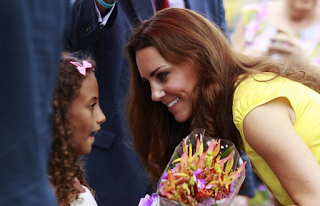