CNN) -- A French magazine has been fined for publishing topless photographs of Britain's likely future queen, Catherine, Duchess of Cambridge, and ordered not to distribute the magazine in print or online, a French court ruled Tuesday.
The court ordered Closer magazine to hand over the original photos to the royal family within 24 hours of the ruling and to pay them 2,000 euros (about $2,600).
The magazine must pay a further 10,000 euros a day if it is late in handing over the photos.
And a French prosecutor opened a preliminary criminal investigation into the incident, the Nanterre prosecutor's office said Tuesday.
Catherine and her husband, Prince William, the second in line to the throne, "welcome the injunction that's been granted. They always believed the law was broken and that they were entitled to their privacy," the palace said.
Continue reading...http://www.cnn.com/2012/09/18/world/europe/uk-royals-photo-controversy/index.html?hpt=hp_c1 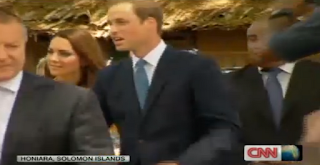