After a brief lull ending twelve years of legal proceedings, the battle begins again around the movable property of the late Count of Paris, who died in 1999. While his nine children won their lawsuit against the Fondation St. Louis one year ago, nothing has been returned to them: Not a bowl, not a chair, not a single painting was recovered by the Orléans siblings after the neverending legal fight.
Even though the judgment in favor of the Orléans children has not been appealed, transfer of these heirlooms could have already taken place. The last wishes of the late Count of Paris (1908-1999), who apparently had deep seeded hatred for his children, had transferred invaluable assets to the foundation he had previously Some argued that Henri made the transfer to protect the cultural integrity of the family's legacy; while others blamed his dislike of many of his children as the main reason behind his actions. However, the donation was canceled in September 2013, due to ill-conceived motives, according to the judges.
But, like a bad dream, when the royal children - and also a grandson, Robert d'Orléans - were finally able to get their hands on the legacy, calculated to be worth tens of millions of euros, they were prevented ... by one of their own. Reportedly, His Royal Highness Prince Jean d'Orléans, a grandson of the late the Count of Paris, opposes this ruling.
This sudden rebuff is not linked to the desire of this descendant to preserve the last wishes of his grandfather. Those involve din the case argue that the legal actions of Jean d'Orléans are worn, more simply, by material considerations. He also wants to take advantage of the family's large inheritance. While the judgment was handed down in September 2013, he now claims a share of the cake that his aunts and uncles, as well as his father, Henri d'Orléans, would share without him.
So, last spring, he filed a court summons to them. Quarrels from father to son "therefore continue under the roof of the royal family: Henri of Orléans, who had argued with his father, is TODAY attacked by his son ... To believe that the words of the Count of Paris, before his death, are like a spell that would take effect: "I will only leave you hatred," he shouted at one his daughters.
Moreover, when the lawsuit filed by Prince Jean d'Orléans became known, it had the effect of a cold shower on the Orléans siblings, who were certainly stunned, but are determined to defend themselves. Beloved by his grandfather and grandmother, who had bequeathed him a quarter of her estate, this assertive prince has nothing,  they argue, to claim. In May 2004, Prince Jean d'Orléans had indeed signed a deal in which he agreed not question any of the inheritance if the course of justice turned in favor of the heirs. In exchange, he received 300,000 euros.
But the financial appetite is now awakened! The press has estimated that the equivalent of tens of millions of euros may be falling into the family purse. "He asks today the implementation of the will of his grandmother. Today he is aggrieved by this transaction, "said his lawyer, Jacques Trémolet de Villers, who still hopes that a settlement would be reached.
But defending an uncle and an aunt of Jean d'Orléans, Mr. Olivier Baratelli is furious: "Their nephew, who has already received about 2 million euros, is guided only by greed. It is far from the royal virtues and republican principles we tried to inculcate in the family!," he growls.
Given this new imbroglio, movable assets that the heirs of the Count of Paris should have been restored will remain, for now, in the hands of the St. Louis Foundation. Fragile, unique, priceless, they are sleeping in the coffers of Munigarde, a service of the Crédit Municipal de Paris, specializing in the conservation of works of art. The institution retains the portraits of Louis XIII and Louis XIV child by Philippe de Champaigne, sketchbook Louis XIV realized at the age of 7 years. Another treasures include: the portrait of the Duchess of Orléans, the manuscript of the statutes of the order of St. Michael dating from the late fifteenth century ... However, not considering itself the owner of the Orléans treasures,. because of last year's judgment,  the foundation claims the heirs must pay reimbursement for the safekeeping of the artwork that it continues to keep until a final decision ... "A bill of more than € 18,000 has already been sent to us," thundered Mr. Baratelli, who cares about the wallet to his customers. 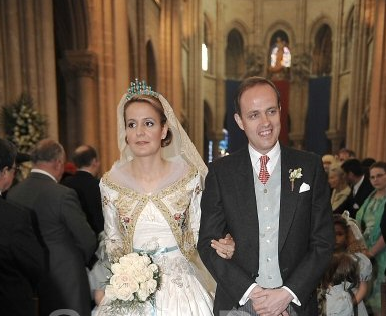 The Duke and Duchess de Vendôme 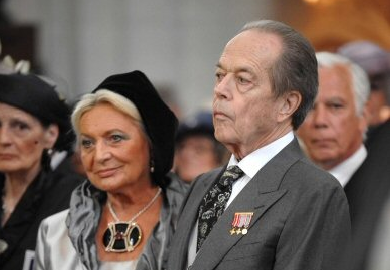 The Count and Countess of Paris