Americans Rate The Queen as Our 6th Most Admired Female

Americans have ranked Queen Elizabeth as their sixth most admired woman - behind Sarah Palin and Oprah Winfrey.

The poll, carried out by USA Today-Gallup, asked respondents what man and woman, living anywhere in the world, they most admired. Rankings from one to 10 were based on total mentions and reported in percentages.

The survey, released on Monday, placed Secretary of State Hillary Rodham Clinton as the most-admired woman for the ninth year in a row, edging out former Alaska Governor Sarah Palin and TV host Oprah Winfrey, as she did last year. 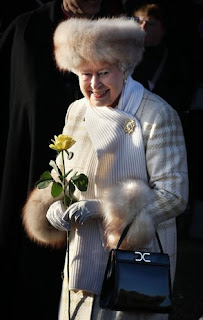 Read more: http://www.dailymail.co.uk/news/article-1342181/USA-Today-Gallup-poll-names-Obama-Clinton-admited-man-woman.html#ixzz19WnCcvLi
Posted by Unknown at 10:47 AM