Biographer of The Countess of Barcelona Speaks Out

The author of Yo, María de Borbón a lauded biography of the late Countess of Barcelona expressed his intention to publish his book, which appeared in 1995, again. On this new edition Mr. Javier González de la Vega intends to clarify many aspects of the countess' life, particularly in lieu of the polemic caused by a new book on her authored by Spanish biographer Pilar Eyre, well-known for explosive comments and statements in her books.

González de la Vega has nearly 100 hours of taped conversations with the late Countes of Barcelona, which he stated would place in context the historical role of the mother of King Juan Carlos of Spain. Furthermore, the author tells us that his relationship with doña María de las Mercedes did not end with the publication of his book, for in fact they continued meeting regularly. González de la Vega says that his last visit to the countess was just two weeks prior to her death.

I have read several times the original version of González de la Vega's book, which ends in the mid-1980's, nearly a decade and a half before the death of the countess. I always find the book an excellent source of material on one of my favorite royal subjects, as well as a woman of indomitable character.


Best of luck on this new endeavor! 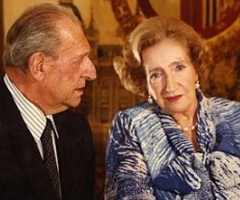 The Counts of Barcelona, don Juan and doña María.
Posted by Unknown at 9:14 AM