Serbia: State Funeral for King Peter II and Others

Among representatives of foreign Royal Families there were Their Majesties King Simeon and Queen Margarita of the Bulgarians, Their Majesties King Constantine and Queen Anne-Marie of the Hellenes, Their Royal Highnesses Crown Princess Margarita and Prince Radu of Romania, Their Imperial and Royal Highnesses Archduke Sandor and Archduchess Herta of Austria, His Highness Sheikh Abdulla Bin Hamad Al Khalifa of Bahrain, Their Royal Highnesses The Margraf and Margrafin of Baden, Their Serene Highnesses Prince Philipp Erasmus and Princess Isabelle of Liechtenstein, His Royal Highness Prince Mabandla Dlamini of Swaziland, Princess Ira Von Fürstenberg and His Serene Highness Prince Pierre D' Arenberg.

Before the ceremony started, His Royal Highness Hereditary Prince Peter placed the Crown of HM King Peter I, His Royal Highness Prince Philip placed the sceptre and orb, and His Royal Highness Prince Alexander placed a diamond sabre of HM King Alexander I on the coffin of HM King Peter II.
His Holiness Patriarch Irinej of Serbia, His Eminence Metropolitan Amfilohije of Montenegro and the Littoral, His Eminence Metropolitan of Dabar and Bosnia Nikolaj, Their Graces Bishop Lukijan of Budim, Bishop Jovan of Sumadija, Bishop Vasilije of Srem, Bishop Ignatije of Branicevo, Bishop Lukijan of Osijek pole and Baranja, Bishop Dositej of Britain and Scandinavia, Bishop Maxim of Western America, Bishop Joanikije of Budimlje and Niksic, Bishop Irinej of Australia and New Zealand, Bishop Atanasije of Hvosno, Archimandrite Metodije of Hilandar, officiated and attended the Holy Liturgy.

After the Liturgy and the Requiem, His Holiness, Patriarch Irinej of Serbia, said: “The honourable Serbian Royal House, and its Head Your Royal Highness Crown Prince Alexander II, in the light of divine force and truth, we are rectifying a great injustice today, human injustice that cried to the heavens. Descendents of Karadjordje, Father of Serbia, witnessed ocupation of their country, were forced to leave their beloved country, and to live in exile for decades. Today, when final wish of His Majesty King Peter I has been fulfilled, that his descendents live in their country with their people, and to be buried at St. George Church in Oplenac, we truly believe that souls of Karadjordje, Prince Alexander, King Peter I and King Alexander I rejoyce today. This is important day for Royal House of Kradjordjevic and their Head Crown Prince Alexander. Serbian children and Serbian people will gather around their graves to learn lessons of patriotism, love for their country, its history and culture.”
Prime Minister of Serbia, H.E. Mr. Ivica Dacic, said: “A final piece of our history’s mosaic has been put in place today. We cannot change the past, but we rectify mistakes today. There are many ideologies, but there is just one Serbia. Therefore, it is very important that our people become united in the future. Long live Serbia!“

H.E. President of Serbia Mr. Tomislav Nikolic, said: “Our nation's history, beside glorious deeds, patriotism, fight for justice and truth, records conflicts, as well. That is one of the reasons that our country has had bad destiny. More Serbs died of acts of their brothers, than from foreign occupiers, and we must not forget that fact. Destiny of Karadjordje, his descendents and his family, represent sublimation of all ours divisions and disasters. We cannot have luxury of divisions and injustice any more.  Serbs have respected justice as highest virtue from the ancient times. Therefor we are rectifying immense injustic at the grave of Supreme Leader Karadjordje today.  And we are making another step toward unity“.

HRH Crown Prince Alexander II, son of Their Majesties King Peter II and Queen Alexandra, and grandson of HM Queen Maria, delivered a moving speech: “We are gathered today here in Oplenac to pay our last respects and bid farewell to King Peter II, Queen Alexandra, Queen Maria and Prince Andrej. The Karadjordjevic's, whose destiny throughout history has been closely tied to the destiny of the entire nation, as well as to the establishment of the modern Serbian State. Their lives are the reflection of what happened to their people and their homeland. Their wanderings and their exile lasted for too long. They lived and died in different parts of the world.

Today they are here in Oplenac, among their family and among their Serbs. For me, as the Head of the Royal Family and for my whole family this a great day. Sad, but solemn. Full of emotions and reverence. Full of personal memories. This is not only a historic moment for Royal Family, but also for the whole Serbian nation and the State of Serbia.”

HRH Crown Prince Alexander II and the Royal Family would like to express their gratitude to H.E. Mr. Tomislav Nikolic President of Serbia, H.E. Mr. Ivica Dacic, Prime Minister of Serbia and Minister of the Interior, His Holiness Patriarch Irinej of Serbia and Serbian Orthodox Church, the State Commission for the transfer of remains of members of Royal Family and Prof. Dr. Oliver Antic, special advisor to President of Serbia, H.E. Mr. Ivan Mrkic, Minister of foreign affairs of Serbia, His Grace Bishop Longin of the Diocese of New Gracanica and Midwestern America in Illionois United States of America, H.E. Mr. Vladimir Petrovic, ambassador of Serbia to the United States of America, H.E. Mr. Dragan Zupanjevac, ambassador of Serbia to Greece, H.E. Dr. Dejan Popovic, ambassador of Serbia to the United Kingdom, Mr. Desko Nikitovic, Consul General of Serbia in Chicago United States of America, The Government of Greece, H.E. Ambassador Dionyssios Kodellas from the Ministry of Foreign Affairs of Greece, Mr. Tom Karacic, lawyer from Chicago, Mr Dusan Djordjevic of Sveta Gora in Chicago, and so many others from Serbia and abroad who contributed that this event of tremendous importance for Serbia and its citizens was made possible. 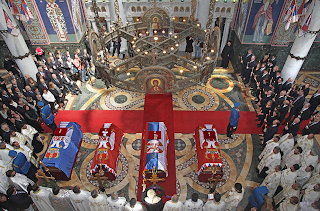 If you look closely, I am immediately behind the priests in the lower left corner.
(Had a fantastic view!) 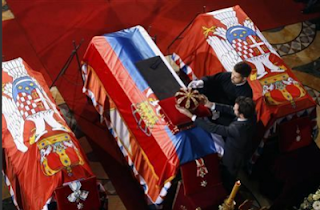 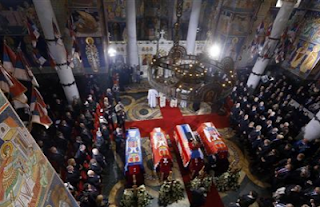 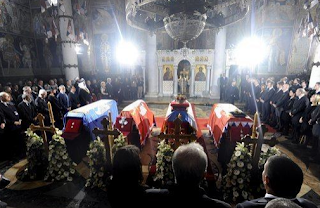 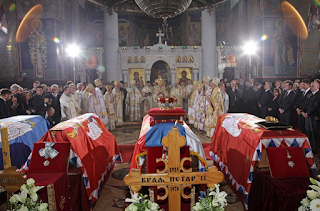 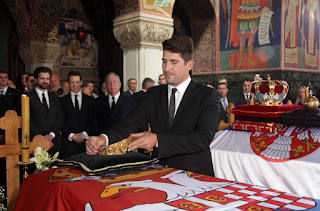 Prince Alexander places the crown on his great-grandmother Marie's coffin. 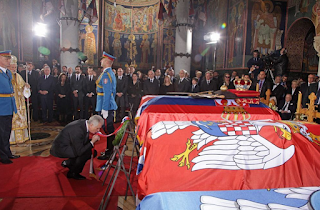 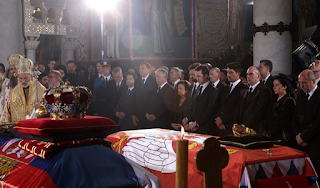 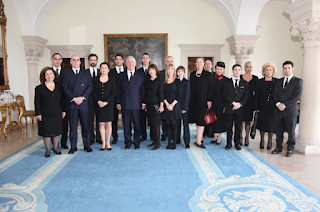 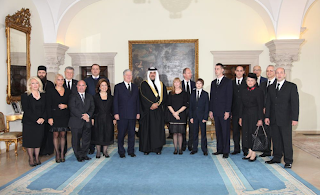 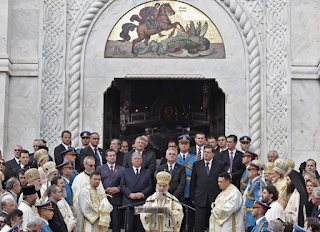 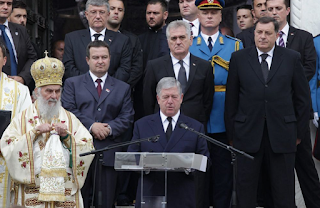 Crown Prince Alexander giving a speech after the State Funeral. 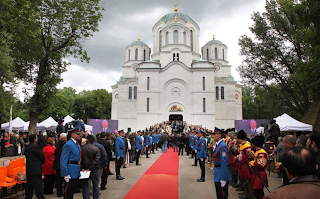 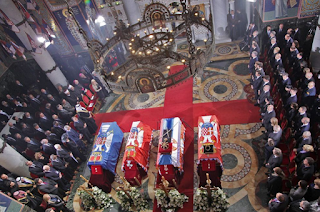 A panoramic view of the state funeral mass. 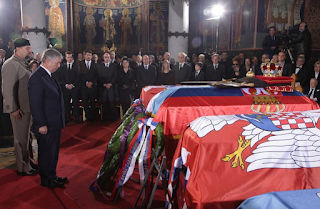 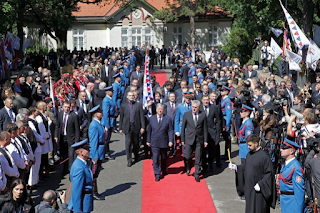 Crown Prince Alexander and the President of Serbia arrive.
(If you look closely, I am to the left center of the images) 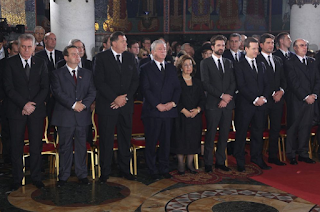 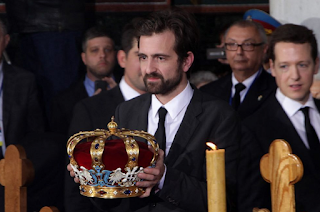 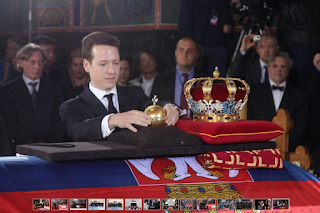 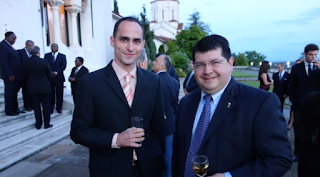 ©Most of the images used in this report were provided by the office of HRH Crown Prince Alexander and hence are protected by copyright law.


http://www.eurohistory.com
Posted by Unknown at 11:36 AM