Serbia: Repatriation of the Remains of Queen Alexandra

FRom the Office of JHRH Crown Prince Alexander:

His Royal Highness Crown Prince Alexander and Her Royal Highness Crown Princess Katherine with her son Mr. David Andrews and High representative of the Ministry of Foreign Affairs of Greece H.E. Mr. Dionysius K. Kodellas and H.E. Mr. Dragan Zupanjevac, Ambassador of Serbia to Greece accompanied the coffin with the earthly remains of Her Majesty Queen Alexandra from Athens to Belgrade in the official repatriation ceremony.
The Remains of HM Queen Alexandra were disinterred this morning at the Tatoi Palace Royal Cemetery in the presence of Their Royal Highnesses Crown Prince Alexander and Crown Princess Katherine, HRH Princess Irene of Greece, Mrs. Alison Andrews, daughter of HRH Crown Princess Katherine, and her daughter in law, the wife of Her Royal Highnesses’ son Mr. David Andrews, Dr. Angie Margaritis Andrews and Princess’ sister Mrs. Betty Roumeliotis and her husband Mr. George Roumeliotis, Professor Dr. Christos Bartsocas, Mr. Vaggelis Chronis, Mrs. Petros, Machas and his spouse Mrs. Evelyn Vougessis, Mrs. Irene Vassilopoulou, Mr. Manos Ioannidis, Mr. Thanassis Kyratsous, Dr. Zissis Boukouvalas and Mrs. Alkistis Prinou – President of Lifeline of Hellas, Mrs. Ioanna Germanou, Dr. Chrysanty Routzounis Konstadakatos, Mr. George Davlas and his spouse Mrs. Elena Davlas, Mr. Giannis Sahinis, Mrs. Anastasia Papamanolis, Mr. and Mrs. Nikos and Roe Konstantas, Mr. Vassilis Koutsavlis, President of Friends of Tatoi, together with Their Excellences Ambassador of Serbia Mr. Dragan Zupanjevac, Ambassadors of Montenegro Mr. Ivo Armenko, Hungary Mr. Jaime Barberis, Jordan Mr. Saker Malkawi, Switzerland Mr. Lorenzo Amberg and Mrs. Christiane Amberg, Ambassador Mr. Dionyssis Kodelas, Ambassador of Poland – Mr. Maciej Krych, Mr. Chronis and Goodwill Ambassador of UNESCO Mrs. Marianna Vardinoyannis.
The Remains of HM Queen Alexandra were seen off by representatives of the Greek Orthodox Church at the airport in Athens His Eminence Metropolitan Athinogoras and Archimandrite Patrikio.
At the Nikola Tesla Belgrade Airport the coffin with the Remains of HM Queen Alexandra was awaited for by Professor Oliver Antic, Special Advisor to President of Serbia, H.E. Mr. Demosthenes Stoidis, Ambassador of Greece in Serbia, and His Grace Vicar Bishop Atanasije of Hvosno with the blessing of His Holiness Patriarch Irinej of Serbia.
A memorial service for HM Queen Alexandra was officiated by His Holiness Patriarch Irinej of Serbia at the Royal Chapel of St Andrew the First Called at the Royal Compound in Dedinje. In his address afterwards, the Patriarch has emphasized: “We are grateful to the Lord that time when they have been forbidden to come back to their country, and to have a final rest at the country that members of Karadjordjevic Royal Family lived for is finally over. The huge injustice has been rectified, praise the Lord!”
HRH Crown Prince Alexander gave a moving speech: ”Thank you all for gathering here today to pay respect to my mother, HM Queen Alexandra of Yugoslavia. I wish to express my special gratitude to His Holiness Patriarch Irinej for being here today and for all his prayers. My mother got married to my father King Peter II while he was in exile during World War II. She shared with him the tragedy of being torn away from his country and his people. Soon they will be together in their eternal place of rest in Oplenac, thus fulfilling my great-grandfather’s King Peter I legacy to have all the members of Karadjordjevic family buried there.
I thank to all members of the Government of the Republic of Serbia for their great support. I owe special gratitude to the State Commission for the transfer of Karadjordjevic family members' remains as well as to Prof. Oliver Antic, for his personal initiative and engagement in this undertaking. I would also like to express gratitude to the High Representative of The Ministry of Foreign Affairs of Greece H.E. Ambassador Dionyssios Kodellas and Serbian Ambassador to Greece H.E. Ambassador Dragan Zupanjevac. I thank everybody who were persistent in helping this journey come true.
We have brought the Queen to her country. Welcome home, mother! Eternal glory to her! “
Prof. Dr. Oliver Antic, Special Advisor to President of Serbia, H.E. Mr. Tomislav Nikolic, also made an address : “After the Easter, we are witnessing symbolic and spiritual resurrection that our nation has been famous for. We owe a huge gratitude to the Serbian Orthodox Church, that has done so much, and that even took the role of the state when the state lost direction, to protect the state with its prayers and its wisdom. The sad Queen, as she was titled by the people, came back to her country.  We were privileged by the higher power, and were given a historic mission to undo a huge injustice and a great sin inflicted on father of Serbia Karadjordje Petrovic and his family, that was stripped of basic rights not just in life, but in death as well. Today we rectified that. Their Majesties King Peter II, Queen Maria and Queen Alexandra came back to their Serbia!“
Following the Church service a reception for state representatives, members of the advisory bodies to the Crown and Religious dignitaries took place at The Royal Palace.
Queen Alexandra was the daughter of HM King Alexander of the Hellenes and HRH Princess Aspasia of Greece and Denmark (nee Aspasia Manos). Queen Alexandra was born in Athens Greece 25 March 1921 and died 30 January 1993 in East Sussex England. The Queen was educated at Westfield, the junior school of Heathfield, then she went to Heathfield. Following schooling in England Queen Alexandra went to Mademoiselle Ozanne in Paris. The Queen was previously buried at Tatoi Palace Royal Cemetery near Athens.
HM King Peter II, HM Queen Alexandra and HM Queen Mother Maria will remain at The Royal Chapel of St. Andrew the First Called until the State Funeral on 26 May in the Church of St. George Royal Mausoleum in Oplenac.
The Royal Chapel in the Royal Compound in Dedinje is open every weekend for visitation, on Saturday and Sunday, from 10 am to 2 pm. 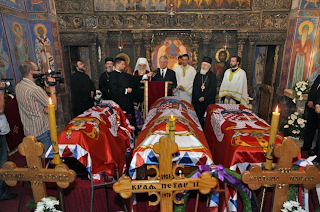 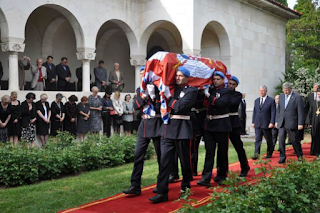 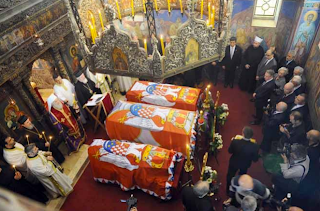 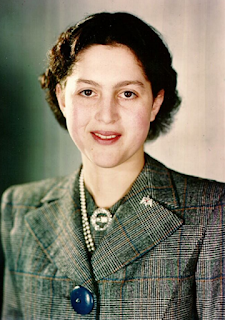 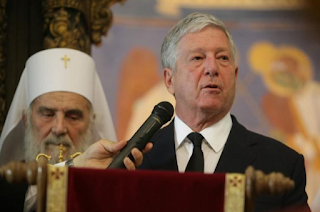 ©SIte of the Serbian Royal Family.