HRH Princess Editha of Bavaria, the oldest surviving daughter of Crown Prince Rupprecht and Crown Princess Antonia, passed away on May 4. She was 88 years old.

Editha Marie Gabrielle Anna was born at Schloß Hohenburg on 16 September 1924. She was the third of six children Crown Prince Rupprecht fathered with his second wife, the former Princess Antonia of Luxembourg. Her siblings included: Heinrich (1922-1958), Irmingard (1923-2010), Hilda (1926-2002), Gabriele (b. 1927) and Sophie (b. 1935). Rupprecht had had three children from his first marriage to Duchess Marie Gabriele in Bavaria, but only one of them survived into adulthood, Albrecht.

The royal children were raised in Bavaria, where their father continued owning vast real estate holdings and several homes. Meanwhile, a cancer was spreading throughout the country, National Socialism. Rupprecht was decidedly anti-Nazi and stood as a moral force against the tentacles spreading from Berlin.

In 1936, not wanting his children to be forced to enter the Hitler Youth and the League of German Girls, Crown Prince Rupprecht made the decision to send the children to school in England. Irmingard and Editha enrolled at school in the Convent of the Sacred Heart in Roehampton. Later the sisters were moved to Italy, where they attended the school operated by the Sisters of the Sacred Heart, located in Villa Lante on the Janiculum Hill overlooking the Italian capital.

Crown Prince Rupprecht left Germany in late 1939, followed buy his wife and their three youngest daughters a few months later. Antonia and her children settled in Florence, where they lived for the following four years. In 1944, after the failed attempt on Hitler's life, Antonia and her children were arrested and detained by Nazi agents operating in Italy. Rupprecht escaped detection and remained underground for the duration of the conflict. Editha, who was also arrested and interrogated, remained in Florence at the Villa Bellosguardo with the Franchetti family. She, nearly twenty years old by then,  had fallen in love with Tito Brunetti (1905-1954), an Italian engineer nearly twenty years her senior. Unfortunately, Editha was discovered by the Gestapo and taken to live with her mother and sisters, all of them ended spending time in three concentration camps. One of her nephew told me, "the Family has been in 3 concentration camps: Sachsenhausen-Oranienburg, Flossenbürg (with Admiral Canaris and Schuschnigg and others) and Dachau. Then they were transported to Plan See and librated there by Americans. One of them was Colonel Albert Caswell Metts who took them, as a young officer, in the armoured car of Goering to Hohenschwangau, then Leutstetten and then to Augsburg, where they were flown out to Luxembourg. He was invited by Cousin Franz to the big feast at Nymphenburg when we had his 70 th birthday, aunt Irmingards 80th and uncle Ludwigs 90th... my grandmother Antonia was separated from her children and guarded by a Nazi woman in the east of Germany and found by a Luxembourg Liaisons officer weighing 36 kilos! Our grandfather and Uncle Henry were hiding in Florence and then managed to escape to the Vatican."

At the end of the war, Editha eventually returned to Italy, where she married Tito Brunetti in Milan on 12 November 1946 and by him had three daughters: Serena (b. 1947), Carlotta (b. 1949) and Antonia (b. 1952). All three married. Serena married twice, both to Italian men. Carlotte married in 1972 Michael de Longueval, Count of Buquoy; while Antonia married firstly in 1982 Count Eric von Waldburg zu Zeil und Trauchburg.

Preparations were in full swing for the wedding of Princess Sophie of Bavaria, Editha's youngest sister, to Prince Jean Engelbert of Arenberg. Then, on July 13, 1954, tragedy struck. The Brunetti's were involved in an automobile accident. Princess Editha suffered  serious injuries, but Signor Brunetti died as a result of the collision. Editha became a widow before the age of thirty.

Crown Princess Antonia, who had just returned to Switzerland suffered a great shock when given the news of the accident. Her health, having suffered greatly during the time when she was a prisoner in the concentration camp, took a decidedly ominous turn for the worst. Sophie's wedding was postponed as the family gathered around Antonia's deathbed. Crown princess Antonia spent her last days surrounded by her children and husband, her stepson Albrecht and her two remaining sisters, Grand Duchess Charlotte of Luxembourg and Fürstin Hilda of Schwarzenberg. Antonia's death took place on July 31, just over two weeks after her daughter and son-in-law's tragic automobile accident.

Five years later she married secondly. On 29 December 1959, Editha and Gustav Schimert (1910-1990) became husband and wife in a small and private ceremony at Tegernsee. With Herr Schimer, Editha became the mother of three sons: Andreas (b. 1961), Christian (b. 1963) and Constantin (b. 1968). All three Schimert sons have married and fathered children. At her death, Princess Editha was survived by her six children and by nine of ten grandchildren.

Princess Editha lived in Munich. Her daughter Antonia owns a canine health clinic in the area of Lindau.

Princess Editha had been in a Munich clinic for some time. She died while there.

May She Rest in Peace... 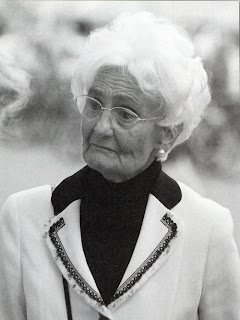 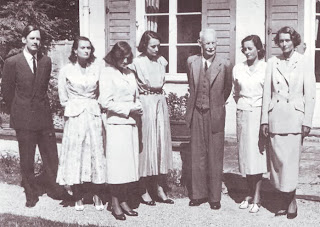 Crown Prince Rupprecht surrounded by his children by Princess Antonia of Luxembourg. 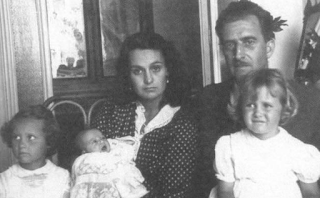 Princess Editha with Tito Brunetti and their three daughters. 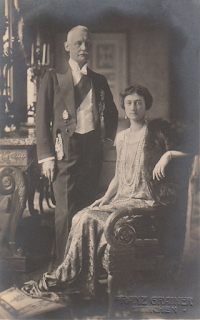 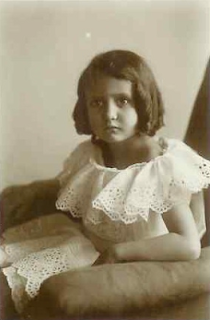