According to the poll done by Belgrade-based SAS Intelligence agency, 32.2 percent of citizens are strongly against the monarchy while 27.4 percent do not have an opinion on the issue.
The agency presented the results of the first poll on the renewal of monarchy and reputation of Prince Aleksandar Karađorđević in Belgrade’s Media Center on Thursday. SAS Intelligence Executive Director Miljan Premović explained that the poll was carried out between April 11 and April 16 and that a total of 1,615 people in 16 Serbian towns, Kosovo excluded, had participated in it. He said that the poll had been carried out in all regions, in both urban and rural areas and that it covered both sexes and citizens of various aged and that it had a 95 percent trust interval “which makes it good enough for scientific publications”. “The main person who inspired us to conduct the poll was in fact world’s leading nation-branding expert Simon Anholt who believes that Serbia is one of the countries with the highest chance to renew the monarchy. Therefore we decided to give the public an insight into one of the social topics that have not been researched and show the mood regarding the renewal of monarchy. The question resembles a possible referendum question: Should Serbia be a parliamentary monarchy? The sample completely reflects Serbia’s social-demographic structure without Kosovo, according to the 2011 census,” he said. According to him, men with a high school diploma and unemployed men from urban areas mostly support the monarchy while highly educated people and pensioners, primarily from Belgrade, are against it.
Continue reading...
http://www.b92.net/eng/news/society-article.php?yyyy=2013&mm=05&dd=10&nav_id=86102 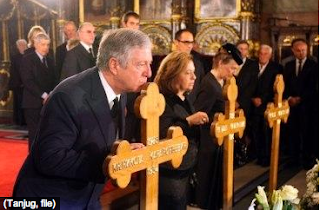