The Queen has been pictured with three future kings - the first such image of royal succession for nearly 120 years.
The monarch is shown with her son, the Prince of Wales, grandson, the Duke of Cambridge, and great-grandson, Prince George, to mark the royal christening.
It echoes a 1894 image from the future Edward VIII's christening, showing him with his father, grandfather and great-grandmother - George V, Edward VII and Queen Victoria.
The pictures were taken by Jason Bell. 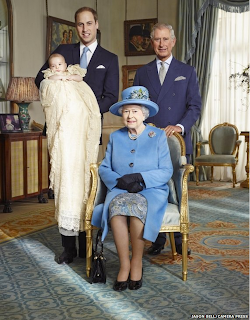