The Wedding of Prince Georg Friedrich of Prussia

POTSDAM, Germany—On Saturday, Georg Friedrich Ferdinand Prince of Prussia and Sophie Johanna Maria Princess of Isenburg will step out of a church on the grounds of a former royal palace here and ride in a carriage drawn by six horses through the city streets as heirs to a 1,000-year history of German emperors and empresses.

A few weeks later, they will go back to their office jobs. Both studied business. Mr. Prince of Prussia, 35, works as a consultant to academics seeking to market their discoveries. Ms. Princess of Isenburg, 33, is a consultant to nonprofits. Their spokeswoman said they weren't available for interviews.

"I think there's a certain part of both of them that is getting involved in this—the dramatic aspects of it—reluctantly," said a friend of the couple, Todd Fletcher, an American composer living in Berlin. 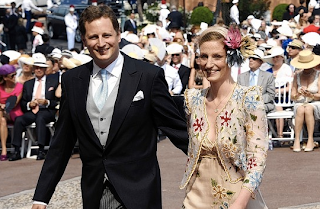