A Visit by Empress Zita to an American Abbey

Since England’s Prince William and his fiancée Kate Middleton announced their engagement last month, paparazzi and royal watchers the world over have scrutinized every detail of their wedding plans.

If the same level of media attention had focused on the comings and goings of royalty 70 years ago, residents of northwest Missouri would have been thrilled to know what was happening at Conception Abbey on Thanksgiving Day in 1946.

Still on display at the abbey, and easily missed if one is not looking for it, is an elegant little rosary — a small testament to the unheralded arrival of a royal personage. It’s a memento of the day a small, dark-haired woman knelt to pray in a small corner of Nodaway County during a Mass of Thanksgiving.

This woman was the Empress Zita, the widow of a man who once exercised virtually absolute power over millions of subjects.

A sign below the rosary explains that Zita was "the last empress of Austria and queen of Hungary, consort of Charles I." Together they had ruled one of the great empires of the 20th century. Austria-Hungary covered most of Central Europe and was a power to be reckoned with.

"I'm the only monk now living at the abbey who was there that day," said Fr. Norbert Schappler of Zitas's attendance at Mass. Schappler recalls that the empress wore “dark, drab clothes.”

Ever-devoted to her husband, Zita dressed in mourning for him from the time she was widowed in 1922 until her own death in 1989 at age 96. 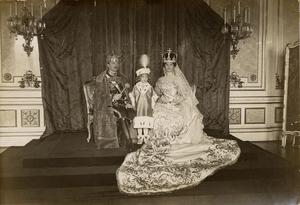 http://www.maryvilledailyforum.com/features/x934183515/War-s-aftermath-brought-empress-to-area-abbey?img=2
Posted by Unknown at 9:32 AM