From Elizabeth to Savannah...

Apparently the Phillips' have chosen Savannah as the name of their newborn daughter...


"Princess Anne's son Peter and his wife Autumn had their first child last Wednesday and her name was not announced.

But prayers in Sandringham church this morning included a special mention by the Rev Jonathan Riviere for "Peter and Autumn Phillips and their daughter Savannah," the first time the name has been used in public.

New grandmother Princess Anne was among the Royal party and told one fan that she will not be spoiling her new granddaugher.

It is the first time the Princess Royal has been seen in public since the arrival of Savannah, who is 12th in line to the throne and was born at Gloucestershire Royal Hospital.

"I congratulated her on the baby and said that I thought she would be spoilt," said Royal watcher Mary Relph, of Shouldham, "but Princess Anne said that the baby wouldn't be spoilt by her," she added.

The Queen, a great-grandmother for the first time, was joined in the short drive to church by the Countess of Wessex while Prince Philip, Princess Anne's husband Vice-Admiral Timothy Laurence and Prince Edward walked from Sandringham House.

The Queen wore a salmon-pink checked coat and matching hat with feathers, there was no sign of the fur hat which caused criticism on Christmas day. The Countess of Wessex wore a black and red floral skirt and black jacket while the Princess Royal was in a petrol-blue coat." 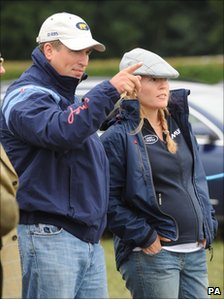