Belgium: A New Reign About to Begin

BRUSSELS — As an exultant Britain awaits the birth of a royal baby, Belgium is preparing to install a new king this weekend and wondering what this means for its own less joyous bout of royal baby mania, over a birth that took place 45 years ago.
Played out in serious newspapers, gossip magazines and, for the past month, a Brussels courtroom, Belgium’s fixation with royal bloodlines revolves around Delphine Boël, a now middle-aged artist who insists she is the illegitimate daughter of Albert II, Belgium’s soon-to-be ex-king.
The palace has not denied this, but has not confirmed it, either, keeping behind a high wall of royal reserve. “This is a private affair, and we have no comment whatsoever,” said a palace spokesman, Bruno Neve.
One thing, though, is certain: Ms. Boël will not be on the guest list on Sunday when Belgium’s political and social elite gather to watch Albert II, 79, sign a declaration of abdication and then his son Prince Philippe, 53, be sworn in as this tiny nation’s new monarch, its seventh since Belgium became an independent state in 1830.
Unlike most European royalty, Belgium’s monarchy still has modest but, on occasion, critical political powers. In addition to his duties cutting ribbons and hosting banquets, Albert II played an important role in settling a political deadlock after inconclusive elections in 2010 that left Belgium without a government for more than 500 days.
Continue reading...
http://www.nytimes.com/2013/07/20/world/europe/belgium-also-awaiting-possible-news-of-a-new-royal.html?nl=todaysheadlines&emc=edit_th_20130720&_r=1& 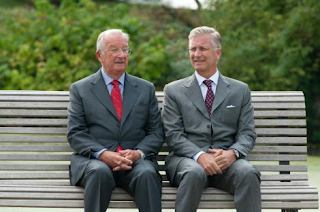 King Albert II and the Duke of Brabant.