Her royal highness The Duchess of Cambridge is reportedly in labor. After much anticipation and speculation as to the baby's gender, it appears the world will soon get to meet the Prince or Princess of Cambridge. The New York Times reports:

"A brief message on Twitter was the first of a series of carefully scripted disclosures set to culminate in the announcement of a birth that seems certain to draw unparalleled media coverage, even in the annals of Britain’s headline-making royal family.

“Her royal highness the Duchess of Cambridge has been admitted to St. Mary’s Hospital, Paddington, London, in the early stages of labour,” said a message from Clarence House, the official residence of the duchess and her husband, Prince William, the duke of Cambridge.

A spokesman for the couple, speaking in return for customary anonymity, said that the duke and duchess had traveled without a police escort. “Things are progressing as normal,” the spokesman said. 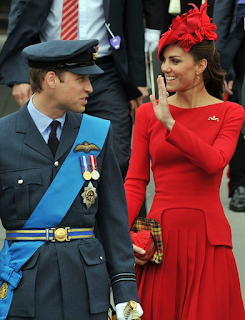