Belgian state TV reported that the 79-year-old monarch would make an announcement on all of the major networks at 18:00 (16:00 GMT).

His son, Crown Prince Philippe, 53, is next in line to the throne.

During Belgium's political deadlock in 2010-11, the king - who is due to mark 20 years on the throne next month - took on the role of mediator.

Media reports say he will announce his abdication to take effect on Belgium's national day on 21 July.

King Albert met the Belgian government's cabinet earlier on Wednesday to inform them of his decision, Belgian state TV reported.

The palace said in a statement: "The core council of ministers has convened in the presence of the king. The king will speak to the people at 18:00 via a radio and television address."

Following the king's announcement, Belgian Prime Minister Elio Di Rupo will address the nation.
King Albert was sworn in as the sixth king of the Belgians on 9 August 1993, following the death of his brother, King Baudouin at the age of 62.

After he succeeded his brother, King Albert became embroiled in a major royal scandal when he was alleged to be the father of an out-of-wedlock daughter, Delphine Boel, and suffered a major crisis in his marriage with Queen Paola.

That issue came to the fore again this spring when Ms Boel opened court proceedings to prove she was the king's daughter. There is some speculation in the media that may have influenced his decision to abdicate. 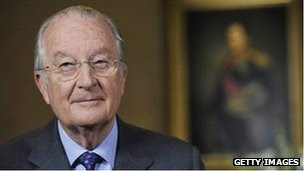