The Royal Family of Norway – A new book

This is a review of the newest book added to the Eurohistory catalogue!


Unique glimpse at royal days gone by
By Nina Berglund

A small publishing firm in Oslo has compiled a large book that’s being called a “royal family album” of sorts. It’s packed with photographs of Norway’s royal family taken mostly from the 1930s to the mid-1950s, some of them never before made public.

King Haakon (from left), Queen Maud, Crown Princess Märtha and Crown Prince Olav on official duties in 1938, just before Maud's death in England later that year. PHOTO: Bastion Forlag
The book focuses on the years when the late Crown Princess Märtha was at the center of attention and when, as author Morten Ole Mørch claims, Norway’s monarchy evolved into a strong institution. Märtha was a Swedish princess and the cousin of her suitor, Norway’s dashing young Crown Prince Olav, father of today’s King Harald V.


There are many photos of today’s king as a little boy, along with his two older sisters, princesses Ragnhild and Astrid. The book, however, concentrates on their mother, Crown Princess Märtha, and, to some degree, her mother-in-law Maud, the British princess who married a Danish prince and eventually, as fate and politics would have it, became queen of Norway while continuing to speak English.

The vast array of photos is accompanied by straightforward biographical history of the royal family members and the times themselves, from the roaring 20s through the 1930s, the war years and the post-war years, when the royals came home from exile in Britain and the United States to a nation suffering after the German occupation but keen to rebuild. There’s a lot of history packed between the covers, including detailed accounts of major events like the death of Queen Maud, and the book is available in English as well as Norwegian, instead of only being in Norwegian with some English summaries or captions.


What’s arguably most intriguing with the book, however, are the photos themselves, and the rich detail they offer of a a bygone era. The clothing, the knick-knacks in the royal homes, the art on the walls and treasures on the shelves, the gifts displayed in connection with the wedding of Märtha and Olav – the reader can spend hours poring over these details to get a feel for what life was like in their times and privileged universe. Indeed, the book’s original title in Norwegian translates to “How they lived: The Royal Family during the years with Märtha.” The English version is simply called “The Royal House of Norway” and doesn’t fully reveal the degree of the insight on tap.

If interested in a copy email us at books@eurohistory.com 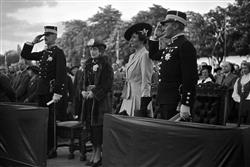