Debo Devonshire – Queen of her Own Realm

A wonderful review of the Dowager Duchess of Devonshire's books:

"How do you even begin to write about two of the most storied people alive? One — the Anglo-Irish travel writer Sir Patrick Leigh Fermor, now 95 — infiltrated Crete during World War II, disguised as a shepherd, and captured a German general (an exploit that won him a Distinguished Service Order and inspired a film starring Dirk Bogarde). Fermor’s great friend Deborah Vivien Freeman-Mitford Cavendish, known as Debo, the Dowager Duchess of Devonshire, now 90, is the youngest (and last surviving) of the endlessly fascinating Mitford sisters, the six daughters of the eccentric Lord and Lady Redesdale. In 1956, in a letter Fermor wrote to friends after spending a holiday at Lismore, the Devonshires’ castle in Ireland, he tried to describe his hostess. She was “funny, touching, ravishing and enslaving,” he wrote, which made up for her “engagingly unashamed philistinism.” The duchess told Fermor she hated books — with the exception of Beatrix Potter’s “Ginger and Pickles,” the tale of a dog and cat who run a country grocery. Fermor was utterly charmed, and the visit spurred a correspondence that has spanned six decades. 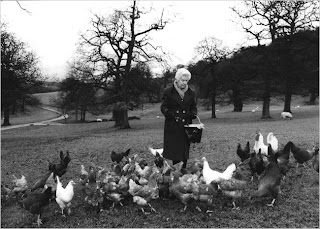 Two new books, “In Tearing Haste,” a collection of their letters, edited by Mitford’s niece by marriage, Charlotte Mosley, and “Wait for Me!,” the duchess’ latest memoir, teem with memories of love, war, betrayal, heartbreak, housekeeping and frolic. Fermor is the author of nine previous books (“A Time of Gifts,” his account of a journey on foot across Europe, is a classic). And a stack of volumes chronicle the doings of Debo, her sisters and their friends and relations in fiction, biography, memoir, letters and even musical comedy. When the play “The Mitford Girls” opened in Chichester in 1981, the duchess saw it (“What a lark”) and wrote to Fermor, “It’s dotty of course,” then added, “How could they be expected to get anything right.” How indeed could anyone but a Mitford convincingly play one? In “Wait for Me!” she corrects and extends the record, creating a personal pageant of the last century.


Mitford begins in the rural idyll of her childhood. “It was a perfect entity,” she writes of Asthall, a village in the Cotswolds, “where every element was in proportion to the rest: the manor, the vicarage, the school and pub; the farmhouses with their conveniently placed cowsheds and barns; the cottages, whose occupants supplied the labor for the centuries-old jobs that still existed when we were children; and the pigsties, chicken runs and gardens that belonged to the cottages.” Soon the family moved to nearby Swinbrook, where she was enthralled by the village blacksmith, “one of those men with whom animals are calm and the horses stood peacefully to be shod, resting their foot on his leather apron.” Her evocation of this feudal paradise is so tantalizing one almost longs to be a serf."