CP Alexander: "Prayer Breakfast is an unrivalled opportunity to meet with many people not only from the United States, but from around the world. Here, friendships that are made are permanent and we are here in Washington for the third time at the Prayer Breakfast. Discussions are made on the situations in the world, but this time the emphasis is on events in Egypt, Jordan, Tunisia, and of course we talked about Serbia, its problems and future. We had interviews with congressmen, senators, and exchanged opinions about our country. This is a large set of social and political connections".

Изговор
Читај фонетски
Voice of America: Belgrade strives to become a member of the European Union as soon as possible. What do you think EU membership could bring Serbia?
CP Alexander: "I believe that it is of great importance we accomplish this relatively quickly. The future as a part of European Union is important for entire region and nobody wants Serbia to be the last country to join the Union. I think this membership can help us greatly to achieve much for our country and its citizens in accordance to the benefits that EU members already enjoy. Russia does not oppose Serbia's joining the EU, because they see Serbia as a friend within the European Union. Relations with the United States are also positive and Washington supports our aspiration to become EU members. However, there must be plenty to do in this regard, including further cooperation with the Hague Tribunal, as well as other issues. I hope that we will end this year submitted all necessary documentation. "
Изговор
Читај фонетски
Voice of America: One half of the original EU member states are Constitutional Monarchies. Given your family heritage you are advocating for this type of governmental structure?
CP Alexander: "I think that country would definitely benefit out of that situation.  Karadjordjevic family is deeply rooted in the history of modern Serbia. Constitutional monarchy provides a unifying centre, unity and continuity. Important is to have the head of the state who is neutral person, not a member of any political party. Of course, we would still have free and fair elections and Prime Minister who would manage the country. I think that Monarchy would be good for Serbia, its image abroad and for business".
Voice of America: Most former communist countries of Central and Eastern Europe adopted a law on the returning private property confiscated after the Second World War. Where are we now in terms of the law in Serbia, including your and the property of others?
CP Alexander: "Unfortunately, we are lagging behind. All neighbouring countries, such as the Czech Republic, Hungary and others have adopted such a law. As you know, 1947 Tito asked Kardelja to sign a document on the confiscation of private property, including our own, and revocation of citizenship. After restoration of democracy they gave us our citizenships, on which we congratulate them. Then it was implicated that a new law on restitution will be adopted, but that still didn’t happened.  One of the requests of the European Union is that this must be done in order to Serbia become EU member. Therefore, either to return property or to compensate. I believe the issue will be resolved once and for all 2011. One should take into account the legal advices of experts in the Unite States of America and European Union on how to resolve this question and I believe it is important that Serbia responds to its obligations. 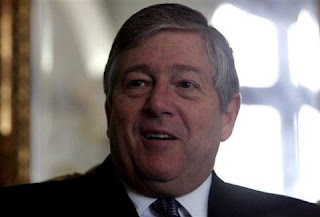 (Courtesy of Crown Prince Alexander of Yugoslavia)
Posted by Unknown at 9:49 PM