1st February 2011
The Prince of Wales and The Duchess of Cornwall watched a variety of performances and met with supporters during a gala dinner for The Prince’s Foundation for Children & the Arts this evening.

Attending the black-tie dinner and performance in the Ballroom at Buckingham Palace, Their Royal Highnesses were given a preview of new West End musical The Wizard of Oz, along with a reading by comedian Rowan Atkinson and singing by tenor and Children & the Arts ambassador Alfie Boe.

The charity, founded by His Royal Highness in 2002, aims to give children and young people the opportunity to get involved with the very best of the arts.

Danielle Hope, who performed for “Somewhere over the Rainbow” for Their Royal Highnesses, said: "It was just magical to perform tonight, it was like the preview of the preview.

The Prince told supporters attending the gala that the charity did an excellent job to encourage young people to experience the arts. 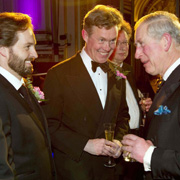 The Prince’s Foundation for Children & the Arts website
Posted by Unknown at 12:02 PM