7th February 2011
The Prince of Wales today met soldiers from the Mercian Regiment who are in training before they deploy on operations to Afghanistan next month.

His Royal Highness visited a windy Salisbury Plain in Wiltshire to meet personnel from The 3rd Battalion (Staffords) who are taking part their final training exercise.

The Prince, who is Colonel-in-Chief of the Mercians, met soldiers and officers from C Company and a contingent of Polish soldiers who will work within the Danish Battlegroup under the command of Task Force Helmand.

The Prince was given updates about the unit and learnt about the training the battalion is undertaking.

Afterwards he met members of the company in the cook house and was shown some of the unit's equipment. He then joined the company for a photograph.

The battalion is to deploy to the Nahr e Saraj area of Helmand province for the six-month tour.

Commanding officer Lieutenant Colonel Giles Woodhouse said: "I am hugely proud to be taking the men on operations in Afghanistan.

"It's a huge honour and challenge but it's one, I feel, we are ready for." 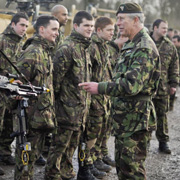