Princess Victoria of Sweden's marriage a crossroads for royalty

He shook like a leaf, she cried like a princess. And so, Swedish Crown Princess Victoria had her prince, a commoner in the guise of handsome gym trainer Daniel Westling.

The Swedish royal wedding at Stockholm Cathedral on Saturday, with 8,000 soldiers and police patrolling rose-draped streets, sealed in matrimony the biggest palace love story since British Prince Charles and Diana tied the knot in 1981.

The 1,000 year-old Swedish royal court hoped to parlay that attention into boosting support for the figurehead monarchy at Kungliga Slottet. Instead, the incessant media coverage of the 8-year relationship between Crown Princess Victoria and now Prince Westling may have backfired, as many Swedes see the pomp and cost as anachronistic – even damaging to a nation politically drawn toward egalitarianism. 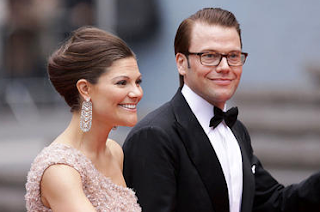 http://www.csmonitor.com/World/2010/0619/Princess-Victoria-of-Sweden-s-marriage-a-crossroads-for-royalty
Posted by Unknown at 4:37 PM