Danish Baby Arrival – Seems Like This Time's the Time

Princess Mary has given birth to a boy and a girl at a Copenhagen hospital.
The births, which came on Saturday morning, local time (about 9.30pm AEDT) at Rigshospitalet, had been much anticipated with two false alarms this week.

Crown Prince Frederik told the gathered press at the hospital that following about four hours of labour, the boy cane first, followed half an hour later by the girl.

A relieved Crown Prince Frederik said the births went well and there was no nail-biting.
He said there were two small hearts to watch now and it was almost like the first time when he became a dad.

Both mother and children are doing well and he and Mary are very happy.
The girl is measuring 46cm and weighs 2554 grams while the boy weighs 2674 grams and measures 47cm. 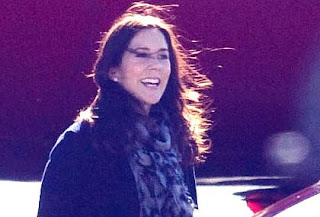 http://www.theage.com.au/lifestyle/people/twin-smiles-prove-marys-crowning-glory-20110108-19jc7.html
Posted by Unknown at 6:13 AM