The Worcesters...An Exercise in Farming

Next month, the European Parliament will get down to discussing a number of animal-welfare issues, especially concerning cruel methods such as battery production for hens and the use of small cages for pregnant pigs. The legislation to outlaw these practices is already on the statute books of some countries, but not all member states are vigilant.
Political parties aren't the only institutions pressing these issues —one of the most determined campaigners in Britain is a very vocal English aristocrat and activist called Tracy Worcester.

The 52-year-old Marchioness of Worcester has gained both fame and notoriety for her championing of Green causes, especially her opposition to the farming of pigs in Eastern Europe by giant corporations. Her 2009 documentary "Pig Business," highlights the health and environmental issues caused by factory farms in Poland and elsewhere. The last time I saw her in activist mode was at the Slow Food Congress in Turin last October, where she had set up a stall and buttonholed officials while wearing a billboard on her back advertising her documentary. 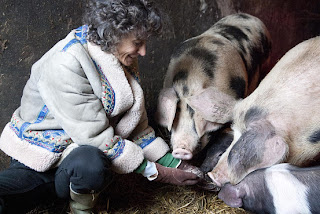 Lady Worcester feeding pigs at Bye Farm on the Badminton Estate.
To continue reading click on the link...
http://fr.groups.yahoo.com/group/royaute2/message/62211
Posted by Unknown at 9:53 AM