Our Friend Hugo Vickers Comments on "The King's Speech"

My view is that a film is a film, and you have to move the drama on. People can say, for example, that Churchill didn't play nearly as big a role as he does in the film – he wasn't actually there at such and such a point, he never uttered those words, and so on. But the average viewer knows who Churchill is; he doesn't know who Lord Halifax and Lord Hoare are. I don't mind these things at all.

Of course, when the king made his famous speech after Chamberlain had declared war on Germany, none of those high-ranking officials who appear with him in the film were present. But they need to speak to the king, there's a point that needs to be made.

Continue reading by clicking the link below... 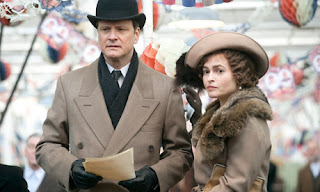 Colin Firth as Bertie, Helena Bonham-Carter as Elizabeth in The King's Speech
http://www.guardian.co.uk/film/2011/jan/09/how-historically-accurate-is-the-kings-speech
Posted by Unknown at 8:13 AM