The first child delivered, a son, was born at 10:30 weighing 2674 grams and measuring 47 centimetres.

The second child, a girl, was delivered 26 minutes later weighing 2554 grams and measuring 46 centimetres. Both reportedly have dark hair.

While the kingdom has been left guessing about the genders since it was announced in August that the Australian-born Mary, 38, was expecting twins, the closest members of the royal family were aware of their genders, according the crown prince.

No names have been mentioned for the twins yet, but Frederik, 42, noting that today is also Elvis Presley’s birthday, joked “we can call one of them Elvis for now”.

The twins are the third and fourth children for the royal couple. Their first, Prince Christian, was born in 2005 and is second in line to the throne after his father. Princess Isabella was born in 2007 and is third in line.

As is the case with most multiple births, mother, father and the two newborns will remain in the hospital for up to seven days. 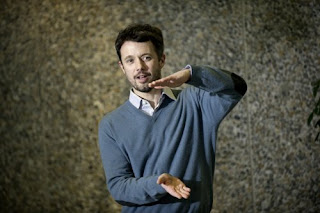 http://www.cphpost.dk/news/national/88-national/50780-royal-birth-its-a-prince--and-a-princess.html
Posted by Unknown at 9:03 AM