Princess Jeanne de Chantal, princess of France, was born on 9 January 1946. She is the sixth daughter of the late Count and Countess of Paris. Chantal was baptized on 21 January at Saint Nicholas Church in Pamplona, Spain. Five years later she began school in Lisbon, later continuing her studies at "La Providence", a private school near Eu. In the meantime her father was completing the restoration of the Coeur Volant, the vast residence in Louveciennes that he had purchased upon returning to France after the abolition of the law of exile.


Later on, and once settled at Louveciennes Chantal was instructed by private tutors, followed by attendance to a private school at rue Saint-Dominique in Paris. she finished her secondary studies at a boarding-school in Gouvieux in the Oise region of France.

In 1965 Princess Chantal acted as godmother to her nephew Prince Jean, Duke de Vendôme and second of the present Count of Paris. Jean's older brother François being mentally handicapped, it is Vendôme who will effectively serve as Head of House France upon the passing of his father. In the meantime, Chantal and her younger brother Thibaut lived in an apartment in Neuilly at the end of the 1960s and while they attended school in Paris. She possessed a talent for painting and the plastic arts, which led to her attending the Estienne School in Paris, a renowned art center in the French capital.


Princess Chantal became engaged to Baron François-Xavier de Sambucy de Sorgue, a member of a noble family originally from Bologna, Italay. The Sambucy de Sorgues established themselves in Rouergue in the XIV century. The family also had contact with the Orléans as François-Xavier's great-uncle, Father Gaston de Sambucy de Sorgue, was the priest who officiated over the burial ceremony, in the Royal Chapel at St Louis de Dreux, for the Duchess d'Orléans, King Louis-Philippe's mother. Anyhow, François-Xavier and Chantal were married at the Royal Chapel at Dreux on 28 July 1972. She wore a splendid wedding gown designed by renowned couturier Balmain, as well as a diadem by Mellerio, a gift from her in-laws.

Upon returning from their honeymoon, the couple settled in an apartment in Neuilly. Chantal gave birth to three children: Axel (b. 1976), Alexandre (b. 1978) and Kildine (b. 1979). In 1981 the Sambucy de Sorgues moved to New York City, where they lived for the next four years, returning to France at the end of 1985. The Baron is an engineer and has had a successful career in the field of information technology.

Princess Chantal and her husband are among the luminaries of Parisian social life. In 1994 she published a book titled "Princess and Citizen." Three years later she celebrated her Silver Wedding anniversary on a ship while cruising the River Seine. Many of her family members and friends were invited to this unique party. This celebration was followed by a ball at the Jockey Club to celebrate the 18th birthday of her daughter Kildine. Although distanced from her father for many years, as were most of the late Count of Paris' children, in his later years Princess Chantal rekindled contacts with her very complicated father.
Today Princess Chantal and her husband spend their time between an apartment in Paris and properties in the Yvelines and at Montnajour. She continues to paint, as do several of her sisters, and has had several exhibitions. She is also the grandmother of four children as both Kildine and Alexandre are married. Axel remains unmarried. 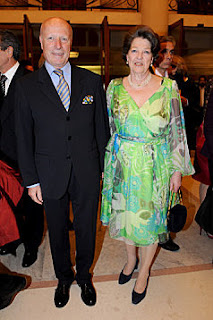